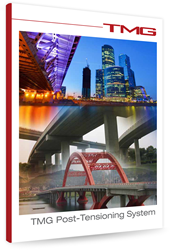 Post tensioning is where prestressing force is permanently introduced into the concrete structure after the concrete has hardened. By stressing properly positioned high strength prestressing tendons with the help of Stressing Jack, TMG Post Tensioning System introduces constructive stress into the concrete structure, thus increasing overall productivity and usage efficiency of construction materials. TMG Post Tensioning works covers the whole spectrum of engineering, from bridge construction, buildings, to civil applications, both above & underground.

To understand the advantages of post tensioning, it is important for us to study concrete behaviour. Concrete has high compression capability (the ability to withstand load) yet weak in tension. It will crack under pulling forces. In conventional concrete construction, if a load is applied onto the concrete beam, the beam will tend to deflect under the weight of the load. And it is under this deflection, the concrete that is furthest away from the load will tend to be stretched and get elongated. However small the stretch or elongation, it is enough to cause the concrete beam to crack. And to eliminate this problem, operators will normally embed rebar cages to act as tensile reinforcement to counter this phenomenon. But these rebar are passive by nature! That is to say, these rebar are not carrying any load. Until such a time when the concrete started to deflect and crack, the rebar will then start to carry load and work against the force of the crack. You can say that rebar is a passive reinforcement.

However, in post tensioning, the tendons are active reinforcement. The prestressed force in the tendons will enable the beam to withstand and carry the load. And under proper design and installation, post tensioned beams have minimal deflection and almost no cracking issues, even under the conditions of full load.

These days post tensioning uses low relaxation 7-wire high tensile steel PC strand as prestressing tendons. By using these high tensile steel strand, we can greatly reduce the usage of non-prestressed reinforcement steel, typically with a ratio of 1: 3 or 4. This allows us to have a better utilisation of materials in the course of construction.

Mechanical anchorage devices (commonly known as ‘Anchors’) are used on the 2 ends of these tendons to provide the necessary anchorage function after the stressing of the tendons. Post tensioning are generally classified into 2 category, namely bonded and unbounded.

In a bonded system, the tendons in the ducts are buried intside the concrete and grouted after stressing. The purpose of filling with grout is to introduce compatibility between the prestressed concrete and tendons. This will also make the whole concrete structure as homogenous as possible (that is why the term ‘bonded’). This means that after the bonding, any applied load (or strain) that is experienced by the concrete is also felt by the prestressed tendons, and vice versa.

Post tensioning introduces deviation forces (curvature profile of tendons), anchor forces and frictional forces into the concrete. These forces are optimally utilised through a variety of tendons profile and positioning, and also through carefully planned stressing sequences to control deflections, which is necessary to counter loads and prevent cracking in the concrete.

The advantages of post tensioning technology in civil constructions are :

TMG Post Tensioning System complies with international standards and is widely accepted in many countries. We are also well known for our reliability and high performance products.